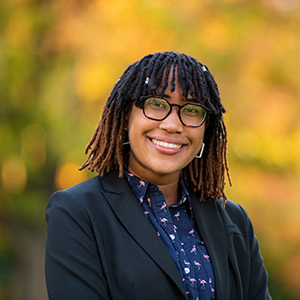 Avery Broughton is an environmental activist and passionate baker. She has interned and lobbied Congress to garner support for H.R 763, a bipartisan carbon fee and dividend bill, with the Citizens’ Climate Lobby. She has worked with the Sunrise Movement, the Youth Climate Strike, Philly Thrive, and Trash Academy to organize protests and actions around the city of Philadelphia to promote action and provide education concerning climate change. She has served on a board representing Philadelphia residents in hearings on the future use for the land of the former oil refinery site, Philadelphia Energy Solutions. She served as secretary and president of her high school’s student council and was founder of her high school’s environmental awareness club. She played cello in multiple school and city orchestras all throughout high school. She is now in Walsh Hall’s Council on the Spirit and Health and Wellbeing committees. She is a member of GreeND, KiND Club, the Environmental Applications Club, and Juggling Club. 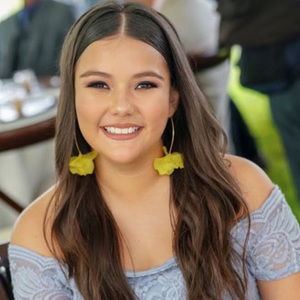 Irene Chinchilla is a Hesburgh-Yusko and Glynn Family Honors scholar from Tegucigalpa, Honduras. She is in the Architecture major and pursuing a minor in International Development Studies as well as Resiliency and Sustainability of Engineering Systems.

Since Irene was little she has been extremely involved in service initiatives that involve children's education and women's rights. In her senior year of high school, Irene along with two of her friends, decided to create a database that would help law enforcement be more efficient in sexual assault and violence reporting in Honduran public universities. She also has an interest in the arts. She is a mezzo-soprano and was part of the cast of the Honduran National Opera. Irene also competed in tennis throughout her life and hopes to continue this interest during her time at Notre Dame.

Irene hopes to use her time at Notre Dame to learn how to combine her professional interests with her passion projects and go back to Latin America, preferably Honduras, and be part of the much needed change. 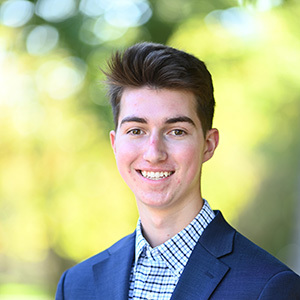 Matthew Doktorczyk is a Hesburgh-Yusko Scholar from Menlo Park, California. He graduated with highest honors from Woodside Priory School. As a student in Notre Dame’s College of Arts & Letters, he intends to study Economics and Data Science.

During high school, Matthew was elected Treasurer and then President of the Honor Society. He also led the Economics & Investment Club. Inspired by his history teachers, he competed in Model United Nations, and served for two years as a Student Advisor to his U.S. Congressional Representative. Throughout high school, Matthew prioritized community service, dedicating over 150 hours each year to those in need. After a rigorous training and testing program, Matthew obtained certification as an animal therapy provider. With his dog Max, Matthew worked with patients at local nursing homes and hospitals. Each summer, he volunteered as a counselor and mentor at the Riekes Center where he supported summer programming for special needs and low-income youth.

Matthew enjoys economics because it requires both quantitative and qualitative thinking. Raised in Silicon Valley, Matthew is eager to investigate and research effective strategies for governments and businesses to collaborate to solve intractable problems and to pursue innovative ways to improve lives. 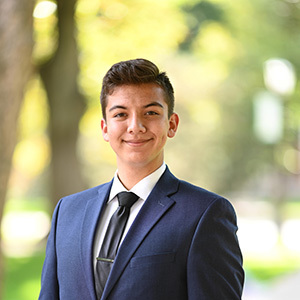 Abraham was the president of his high school's National Honor Society, as well as the president of Students Against Destructive Decisions, which raises awareness of not only drugs, but a variety of harmful decisions. He was also a varsity member in speech and debate in which he competed twice at the national level. Furthermore, he was a member of the Carthage Rotary Club which addressed community issues through service and helped local organizations such as the Carthage Crisis Center. 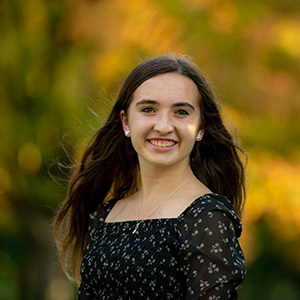 Ella graduated from San Ramon Valley High School in Danville, California, and is majoring in Biochemistry. She makes jewelry to fundraise for social justice issues including women's rights to education, disaster relief, and access to clean water through her nonprofit, Ella's Earrings. She is also very interested in the field of bioremediation, and has done research during high school looking at the ability of superworms to eat and biodegrade Styrofoam. Throughout high school, she danced competitively in ballet and jazz, and also worked at her church in childcare and was a hospital volunteer. 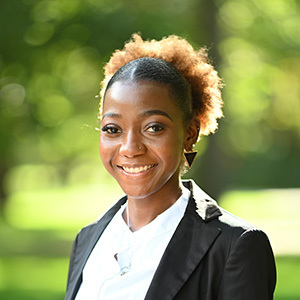 Bupe Lughano Kabaghe is an alumnus of the African Leadership Academy (ALA) Class of 2018. During her time at ALA, she served as Secretary of the Student Government, Head Residential Assistant, CEO of Abana Afrika (a youth empowerment student enterprise), and member of the Anzisha Prize Team (a premier award for young African Entrepreneurs). While still a student at ALA, Lughano also interned at the National Assembly Parliament of Zambia. She was the London School Business ALA Scholar in 2019 and has worked with different organizations such as the 25 May Movement, Zimbabwe and the Women’s Economic Empowerment Project, Zambia (WEEP) where she serves as program support. Lughano provides entrepreneurial leadership training to youth in Zambia and around Africa and held her first entrepreneurial camps at Kalulushi Trust School (where she served as head girl in 2017) and WEEP in 2019.

Currently, Lughano is attending the University of Notre Dame where she is pursuing an undergraduate degree. After her studies, she hopes to pursue a career in public office and run for government office. She is greatly passionate about practical leadership, gender equality advocacy, education, entrepreneurship, and African identity and culture. 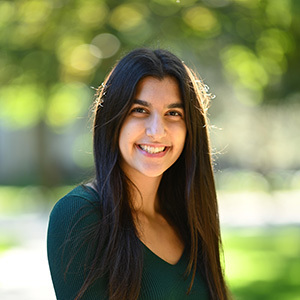 Aria Malkani is a Hesburgh-Yusko Scholar from Indianapolis, Indiana. She intends to double major in Economics and Psychology. She graduated from Park Tudor High School, where she founded a service club and participated in student government, tennis team, and the creation of the student literary magazine. She was also a captain and an avid member of her CyberPatriots cyber defense team. She expects to get involved with cyber security clubs on campus.

Aria’s passion for photography led her to create an organization that provided low income families with framed family pictures as well as digital copies of those pictures. She arranged free family portrait sessions at food pantries and community centers near her school, and provided families with professional photography and equipment. Her work with these families impacted her immensely, and she intends to get deeply involved with service clubs on campus. She is also passionate about solving global health issues and aspires to facilitate service projects abroad. 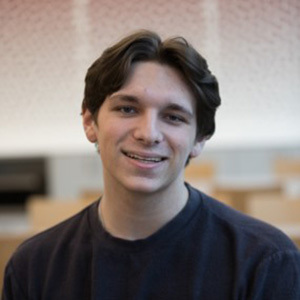 Dane Sherman studies Philosophy and Psychology. When Dane was eight years old, he lost his dad Craig to a polysubstance addiction and when he was twelve years old, he lost his mom Darby to suicide. These losses inspired him to improve mental health policy and support those affected. In 2017, he founded The Other Six, a nonprofit focused on helping those affected by a death by suicide. After a student committed suicide his freshman year of high school, the school administration’s response included measures harmful to those grieving. This prompted him to run for and serve in student government including as the first two-term Student Body President. He helped create the Seattle Academy Suicide Prevention and Advisory Council, advising the school administration on mental health policy. The council helped to get every teacher and student trained in suicide prevention skills, pushed the school to adopt a health curriculum, created a mental health week, and organized a coalition of 32 schools to help them adopt similar programs.

Because of his interest and efforts, the county executive appointed Dane to the King County Behavioral Health Advisory Board where he helped in efforts to raise the minimum age of tobacco to 21 and appropriate funding towards youth marijuana prevention campaigns. He was also heavily involved as the community outreach director on his high school’s FIRST robotics team, which won the THINK award at the World Championships his junior year. Dane was the co-captain of the congressional debate team, a student facilitator, and a Bank of America Student Leader.

At Notre Dame, Dane has been involved in investigative reporting for the Observer, working on a Student Policy Network project on solving the housing crisis in South Bend, serving as a member of the Committee on the Constitution, a member of FUEL in the University Policy department, a dorm liaison for ND Votes, and a member of ND Democrats. He is working as a research assistant for Professor Meghan Sullivan and is currently working on a book looking at LGBTQ+ students experiences in Catholic institutions. 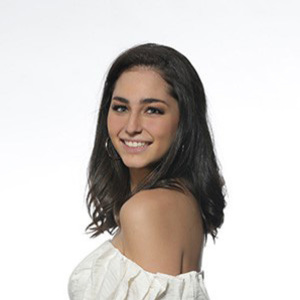 Isabela Tasende is a Hesburgh-Yusko Scholar from Panamá City, Panamá. She graduated from Academia Interamericana de Panamá and intends to major in Political Science and Economics.

Isabela founded an organization called Somos Voces to help teenage mothers finish their education and break the cycle of poverty. She showed leadership by meeting with government officials, coordinating the building of new learning centers, and interviewing presidential candidates about their plans to help marginalized women in Panamá. She was the president of her school’s debate and marketing teams and earned a medal for achievement after a three-week service trip to Panamá’s interior. Back home, she starred in professional plays and musicals. She also directed a supplement for La Estrella, Panamá’s national newspaper, and worked as a graphic design and social media intern at La Doña, one of Panamá’s largest food providers.

At Notre Dame, Isabela is part of the Building Bridges Mentoring Program. She has participated as a writer, designer, and social media manager for Scholastic Magazine. Additionally, she works as a research assistant under professor Abby Córdova studying violence against women in Latin America. 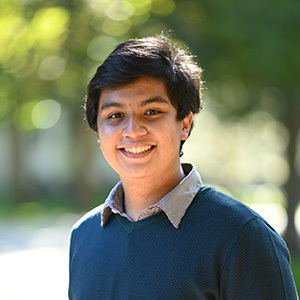 Darien Vazquez is a Hesburgh-Yusko Scholar from New York City. He intends to major in Mechanical Engineering. He attended the Urban Assembly Gateway School for Technology in Manhattan.

Darien is the head of a non-profit dedicated to addressing issues in education in rural parts of the Philippines. He studied biomechanical engineering under Dr. Aaron Kyle at Columbia University. He was also the Head Administrative Officer for his local Navy Junior Reserve Officers’ Training Corps chapter. 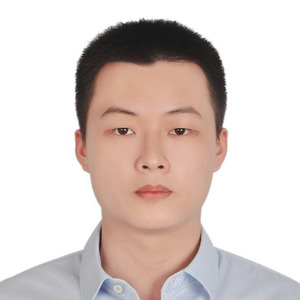 Xinyu (Zach) was committed to studying the retribution system in China in high school. He tried to reconstruct the driving engines that help China build a better legal system. He also loves cooking, meeting new people, debating, and swimming in his free time. Now, Zach is trying to discern a career path in a field like consulting where he can use his abilities to help all sorts of people to solve problems and foster better communities along the way.